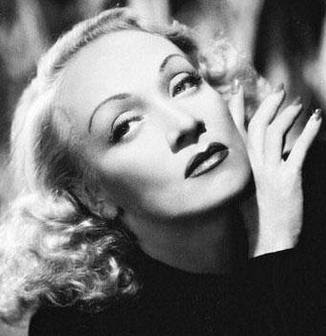 Dear David the Fashion Expert,
Have you noticed that gay men are beginning to pluck their eyebrows in high arches like Marlene Dietrich and Greta Garbo did in the 1930s? What gives here?
~Mr. Furrowed Brow

Dear Mr. Furrowed Brow,
I have a lot of very witty correspondents. Furrow away, my dear. I have only begun to notice this and it is probably a reaction to straight men getting so well groomed that they are plucking their eyebrows also. So gay men have to go one step further.

I don't dish enough people tell me, so you may want to know that the high arched brow came about because Marlene Dietrich had her face lifted in about 1933 and they pulled her forehead straight up. Her eyebrows went way up and her hairline way halfway back across her head. Weird looking. So they made it fashionable. Women plucked their brows completely out and penciled them in high. Think Edith Piaf. Are all these references a half a century behind you? :)

Maybe with women becoming so much more equal gay men want to take advantage of it and become more glam. Andy Warhol always liked to work with transvestites like Candy Darling because he said, "They're the only ones left who know how women are supposed to act."